Gold Buyers in India Are Being Gouged By Modi Government 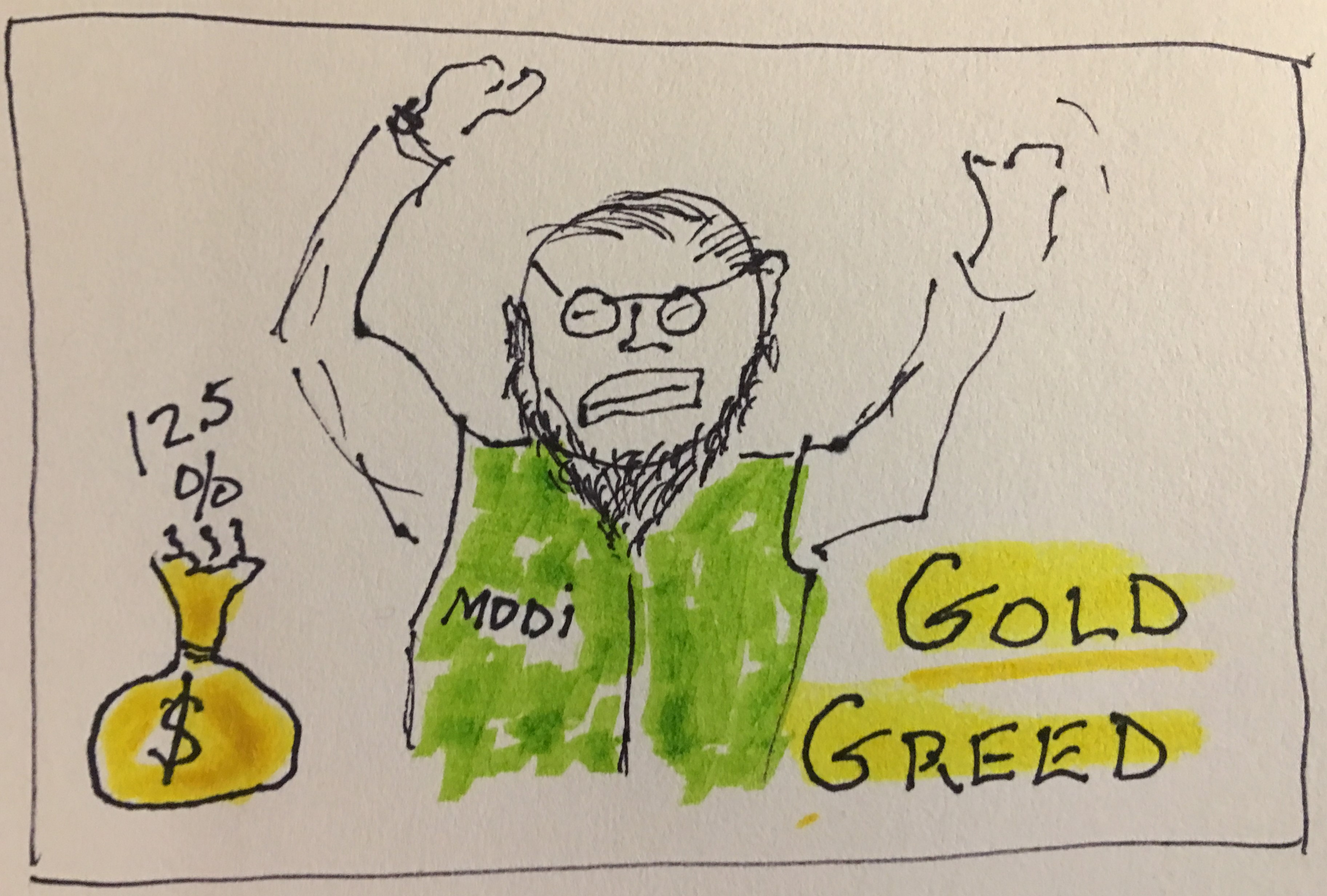 The Modi Government of India has just raised the Customs tax on Gold to an astounding 12.5 %.  India, after confiscating billions of dollars of wealth from it’s citizens is now desperate to protect its failing fiat currency by jacking the Customs tax from 10% to 12.5%.  This is a huge premium for India’s citizens to pay, but it shows that the people are not stupid.  They know what the Modi Government is doing to them through fiat currency and want to own physical gold.  The huge demand proves that gold is way too cheap, and is the subject of huge taxes to suppress the price.

The report from Ukrainian news sources reads as follows:

At 2 a.m. this morning an unmarked transport plane was on the runway at Borispol Airport. According to airport staff, before the plane came to the airport, four trucks and two Volkswagen minibuses arrived, all the truck license plates missing.

Fifteen people in black uniforms, masks, and body armor stepped out, some armed with machine guns. They loaded the plane with more than 40 heavy boxes.

After that a mysterious men arrived and entered the plane.

The plane took off on an emergency basis.

Those who saw this mysterious special operation immediately notified the airport officials, who told the callers not to meddle in other people’s affairs.

Later a returned call from a senior official of the former Ministry of Income and Fees reported that tonight, on the orders of one of the new leaders of Ukraine, the United States had taken custody of all the gold reserves in Ukraine.

The bad news for the people of the Ukraine is that their chances of ever seeing this gold again is slim indeed.  Many other countries have asked for their gold back from the U.S Federal Reserve recently, including Germany.  There is a world-wide struggle for gold at the present time, a secret war pitting China against the U.S.- Euro block.  The bankers know full well that their fiat money system could collapse at any time, and are in a furious struggle to stockpile gold for future operations.

The Never-Ending Story of the Destruction of a Modern State

Double-Whammy to Hit Cyprus, Gold Investors, as International Banksters Drive Down Price of Gold on Spot Markets to Get More of Cypriot Gold

The never-ending story of the destruction of  a modern State continues as the millions of people in the affected areas watch helpless while the financial vultures devour their countries and dump them into a pit of poverty.

The latest outrage in this drama is now taking place in the government vaults in Cyprus, where the EU banksters have demanded Cyprus transfer 10 tons of gold to them in order to receive “loans” to re-capitalize their banks.  This raid on the gold vaults will bankrupt the government of Cyprus, leaving them a mere 3 tons of gold left to “back” their currency.  And even this may vanish into the vaults of the EU, as the estimated value of 400 million euros of the gold is now dropping daily as the big international banksters are at the same time trying to drive down the price of gold on the spot market.

As of 15 April, 2013, gold has been driven down to $1378.00 U.S. per ounce, a huge 12 percent slide since just 11 April.  The big banksters, spreading fear and propaganda around the world, are causing a “panic sell-off” on gold.  Hedge funds and big investors dumping gold is driving down the price, the shorts shaking out anyone long on gold, and at the same time making the gold in the vaults of the Cypriot government less valuable every day, pushing them to “hurry up and transfer the gold to us before it becomes worth less (or worthless?)”.  This is a trick as old as humanity, but the pressure on the Parliament in Cyprus is enormous, and they must be reeling under it.  The events of the last couple of months has shown that in actuality, democracy is finished in Cyprus – it is done.  The very fact that the second “offer” of the E.U. banksters was never passed by Parliament, but only signed directly by the President and the representative of the E.U. was the last nail in the coffin of democracy.  For Cyprus, it is now the rule of the banksters.

Lies Spew Forth From Goldman Sachs and J.P. Morgan

Meanwhile, trying to add fuel to the fire sale on gold, banks like Morgan and Goldman Sachs have revved up their propaganda machines, spreading the lie that inflation is “gone” and there is now no chance of inflation, so all you out there who own gold are stupid to hold it.  Sell it now and get into the stock market they say.

Goldman Sachs: “the retreat of gold is accelerating.”

J.P. Morgan: “inflation is moving down to around 2 percent in the second half of 2013.”

National Securities Corp. in NY: “The perception is that gold is not really needed as a safe haven. People are looking at the stock market, and they’re stunned, and there’s no inflation. So people are saying, ‘What do we need gold for?’”

Bloomberg: “The price of gold is crashing.”

This propaganda push by the big banksters will yield them a huge profit in a short term gold slide.  Morgan, pushing the line that inflation is going to bottom at 2% this year, should talk to some common folks and ask them how they have seen skyrocketing prices in food, gasoline, and rents in the last couple of years. Ooooops!  We don’t count that, say the banksters.  Yeah, the things that matter the most to common folks, aren’t even counted in their phoney statistics.  Meanwhile, Morgan has piled up trillions of dollars of derivatives obligations, and the U.S. Fed and the E.U. have pumped up trillions of dollars and euros in their “quantitative easing” schemes, meaning they have massively inflated the money supply by “creating” and printing it, backed by nothing but hot air.

This may be the biggest gold heist in history, since the post-WW 2 theft of the gold and treasures of the Pacific Basin countries by the U.S. and the Vatican, secretly taking the gold from the caves in the Philippines where the Japanese Imperial forces had hidden it.  That gold was used mainly by the U.S. C.I.A. in black operations and to prop up the post-war Japanese government.  (see “Gold Warriors” by the Seagraves for details).