Larry Summers and Cronies Opening the World to Criminal Banksters 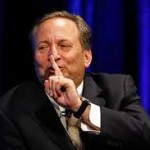 In an August 2013 article titled “ Larry Summers and the Secret ‘End-game’ Memo,” Greg Palast posted evidence of a secret late-1990s plan devised by Wall Street and U.S. Treasury officials to open banking to the lucrative derivatives business. To pull this off required the relaxation of banking regulations not just in the US but globally. The vehicle to be used was the Financial Services Agreement of the World Trade Organization.

The “end-game” would require not just coercing support among WTO members but taking down those countries refusing to join. Some key countries remained holdouts from the WTO, including Iraq, Libya, Iran and Syria. In these Islamic countries, banks are largely state-owned; and “usury” – charging rent for the “use” of money – is viewed as a sin, if not a crime. That puts them at odds with the Western model of rent extraction by private middlemen. Publicly-owned banks are also a threat to the mushrooming derivatives business, since governments with their own banks don’t need interest rate swaps, credit default swaps, or investment-grade ratings by private rating agencies in order to finance their operations.

Bank deregulation proceeded according to plan, and the government-sanctioned and -nurtured derivatives business mushroomed into a $700-plus trillion pyramid scheme. Highly leveraged, completely unregulated, and dangerously unsustainable, it collapsed in 2008 when investment bank Lehman Brothers went bankrupt, taking a large segment of the global economy with it. The countries that managed to escape were those sustained by public banking models outside the international banking net.

These countries were not all Islamic. Forty percent of banks globally are publicly-owned. They are largely in the BRIC countries—Brazil, Russia, India and China—which house forty percent of the global population. They also escaped the 2008 credit crisis, but they at least made a show of conforming to Western banking rules. This was not true of the “rogue” Islamic nations, where usury was forbidden by Islamic teaching. To make the world safe for usury, these rogue states had to be silenced by other means. Having failed to succumb to economic coercion, they wound up in the crosshairs of the powerful US military.

Here is some data in support of that thesis. 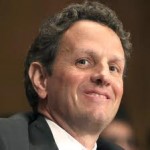 In his August 22nd article, Greg Palast posted a screenshot of a 1997 memo from Timothy Geithner, then Assistant Secretary of International Affairs under Robert Rubin, to Larry Summers, then Deputy Secretary of the Treasury. Geithner referred in the memo to the “end-game of WTO financial services negotiations” and urged Summers to touch base with the CEOs of Goldman Sachs, Merrill Lynch, Bank of America, Citibank, and Chase Manhattan Bank, for whom private phone numbers were provided.

The game then in play was the deregulation of banks so that they could gamble in the lucrative new field of derivatives. To pull this off required, first, the repeal of Glass-Steagall, the 1933 Act that imposed a firewall between investment banking and depository banking in order to protect depositors’ funds from bank gambling. But the plan required more than just deregulating US banks. Banking controls had to be eliminated globally so that money would not flee to nations with safer banking laws. The “endgame” was to achieve this global deregulation through an obscure addendum to the international trade agreements policed by the World Trade Organization, called the Financial Services Agreement. Palast wrote:

Until the bankers began their play, the WTO agreements dealt simply with trade in goods–that is, my cars for your bananas. The new rules ginned-up by Summers and the banks would force all nations to accept trade in “bads” – toxic assets like financial derivatives.

Until the bankers’ re-draft of the FSA, each nation controlled and chartered the banks within their own borders. The new rules of the game would force every nation to open their markets to Citibank, JP Morgan and their derivatives “products.”

And all 156 nations in the WTO would have to smash down their own Glass-Steagall divisions between commercial savings banks and the investment banks that gamble with derivatives.

The job of turning the FSA into the bankers’ battering ram was given to Geithner, who was named Ambassador to the World Trade Organization.

WTO members were induced to sign the agreement by threatening their access to global markets if they refused; and they all did sign, except Brazil. Brazil was then threatened with an embargo; but its resistance paid off, since it alone among Western nations survived and thrived during the 2007-2009 crisis. As for the others:

The new FSA pulled the lid off the Pandora’s box of worldwide derivatives trade. Among the notorious transactions legalized: Goldman Sachs (where Treasury Secretary Rubin had been Co-Chairman) worked a secret euro-derivatives swap with Greece which, ultimately, destroyed that nation. Ecuador, its own banking sector de-regulated and demolished, exploded into riots. Argentina had to sell off its oil companies (to the Spanish) and water systems (to Enron) while its teachers hunted for food in garbage cans. Then, Bankers Gone Wild in the Eurozone dove head-first into derivatives pools without knowing how to swim–and the continent is now being sold off in tiny, cheap pieces to Germany.

The Holdouts – US Conspiracy to “Take Down” Islamic Countries Because They Refuse Usury.

That was the fate of countries in the WTO, but Palast did not discuss those that were not in that organization at all, including Iraq, Syria, Lebanon, Libya, Somalia, Sudan, and Iran. These seven countries were named by U.S. General Wesley Clark (Ret.) in a 2007 “Democracy Now” interview [5] as the new “rogue states” being targeted for take down after September 11, 2001. He said that about 10 days after 9-11, he was told by a general that the decision had been made to go to war with Iraq. Later, the same general said they planned to take out seven countries in five years: Iraq, Syria, Lebanon, Libya, Somalia, Sudan, and Iran.

What did these countries have in common? Besides being Islamic, they were not members either of the WTO or of the Bank for International Settlements [6] (BIS). That left them outside the long regulatory arm of the central bankers’ central bank in Switzerland. Other countries later identified as “rogue states [7]” that were also not members of the BIS included North Korea, Cuba, and Afghanistan.

The body regulating banks today is called the Financial Stability Board (FSB), and it is housed in the BIS in Switzerland. In 2009, the heads of the G20 nations agreed to be bound by rules imposed by the FSB, ostensibly to prevent another global banking crisis. Its regulations are not merely advisory but are binding, and they can make or break not just banks but whole nations. This was first demonstrated in 1989, when the Basel I Accord raised capital requirements a mere 2%, from 6% to 8%. The result [8] was to force a drastic reduction in lending by major Japanese banks, which were then the world’s largest and most powerful creditors. They were undercapitalized, however, relative to other banks. The Japanese economy sank along with its banks and has yet to fully recover.

Among other game-changing regulations in play under the FSB are Basel III and the new bail-in rules. Basel III is slated to impose crippling capital requirements on public, cooperative and community banks, coercing their sale to large multinational banks.

The “bail-in” template was first tested in Cyprus and follows regulations imposed by the FSB in 2011. Too-big-to-fail banks are required to draft “living wills” [9] setting forth how they will avoid insolvency in the absence of government bailouts. The FSB solution is to “bail in” creditors – including depositors – turning deposits into bank stock, effectively confiscating them.

Countries laboring under the yoke of an extractive private banking system are being forced into “structural adjustment” and austerity by their unrepayable debt. But some countries have managed to escape. In the Middle East, these are the targeted “rogue nations.” Their state-owned banks can issue the credit of the state on behalf of the state, leveraging public funds for public use without paying a massive tribute to private middlemen. Generous state funding allows them to provide generously for their people.

Like Libya and Iraq before they were embroiled in war, Syria provides free education at all levels [10] and free medical care. It also provides subsidized housing for everyone (although some of this has been compromised by adoption of an IMF structural adjustment program in 2006 and the presence of about 2 million Iraqi and Palestinian refugees). Iran too provides nearly free higher education [11] and primary health care [12].

Like Libya and Iraq before takedown, Syria and Iran have state-owned central banks [13] that issue the national currency and are under government control. Whether these countries will succeed in maintaining their financial sovereignty in the face of enormous economic, political and military pressure remains to be seen.

As for Larry Summers, after proceeding through the revolving door to head Citigroup, he became State Senator Barack Obama’s key campaign benefactor. He played a key role in the banking deregulation that brought on the current crisis, causing millions of US citizens to lose their jobs and their homes. Yet Summers is President Obama’s first choice to replace Ben Bernanke as Federal Reserve Chairman. Why? He has proven he can manipulate the system to make the world safe for Wall Street; and in an upside-down world in which bankers rule, that seems to be the name of the game.

Check out Ellen Brown at:

Money Is Not Safe In The Big Banks