Posted By: Susoni [Send E-Mail]
Date: Friday, 28-Sep-2012 15:20:36
I just posted an article, by CGI’s Morgan, below. That article is showing one of several scenarios they will use to start the war with Iran. One of them was a Cyber attack on Wall Street or banking. How predictable.

The financial and banking industries are on high alert tonight as a massive cyberattack continues, with potentially millions of customers of Bank of America, PNC and Wells Fargo finding themselves blocked from banking online.

“There is an elevated level of threat,” said Doug Johnson, a vice president and senior adviser of the American Bankers Association. “The threat level is now high.”

“This is twice as large as any flood we have ever seen,” said Dick Clarke, an ABC News consultant and former cybersecurity czar.

Sources told ABC News that the so-called denial of service attacks had been caused by hackers from the Middle East who had secretly transmitted signals commandeering thousands of computers worldwide.

A group of purported hackers in the Middle East has claimed credit for problems at the websites of both banks, citing the online video mocking the founder of Islam. One security source called that statement “a cover” for the Iranian government’s operations.

The banker zombies are not content at having been bailed out at the expense of the living standards of all future generations of Americas. No. In fact, they are fighting tooth and nail for the right to continue to steal more and more from the increasingly impoverished citizenry.

With the election right around the corner, this is what the banksters are up to now. From a Bloomberg article:

A banking trade group is preparing to set up a political fund that would allow members to funnel money anonymously to pro-industry candidates in the final months of the U.S. election campaign.

The American Bankers Association board is set to vote tomorrow on a plan to create a nonprofit that would donate to super-political action committees, or super-PACs, that can spend unlimited amounts on TV ads and other campaign activities.

Note what that said above. Bankers are setting up a non-profit to buy off politicians with anonymous donations. Oh yeah, this is going to turn out well for us. How are they able to do this?

Senator and self-proclaimed Zionist Joseph Lieberman declared that it was Iran who cyber-attacked Bank of America and JPMorgan Chase in 2011 and began with more frequency this year. Lieberman, as the chairman of the Homeland Security and Government Affairs Committee states that the financial attack was spurned from the state-sponsored anti-Muslim film circulating the Middle East thanks to CIA-operatives al-Qaeda.

Lieberman explains: “I don’t believe these were just hackers. I believe this was done by Iran and the Qods force, which has its own developing cyber-attack capacity. And I believe it was in response to the increasingly strong economic sanctions that the United States and our European allies have put on Iranian financial institutions.”

The US government is planting the propaganda seed that according to “highly classified” documents provided by the Join Chiefs of Staff’s Intelligence Directorate confirm that Iranian hackers are committing cyber-attacks against US financial institutions.

This report assures that US mega-banks are a “valid target” of the Iranian “cyber army”. However, the attackers used a known forum that is utilized by the CIA-controlled Anonymous to issue threats and brag about their successes.

The Myth of Democracy and the Rule of the Banks

A talk by Richard Becker from the PSL 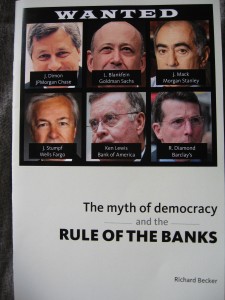 In this video presentation filmed by Support Credit Unions.com.  Mr. Richard Becker discusses his new pamphlet on the Rule of the Banks. He outlines the entire situation of the 2008 financial collapse, how it was caused, the billions in bailout money given to these banks and the trillions more in “guarantees”.  So what happened to all that money?  Why are we still mired in unemployment and poverty?  Mr. Becker exposes the criminal activities of these banks, like Wachovia laundering 378 billion dollars for the Mexican drug cartels, the banks foreclosing on millions of homeowners while they have packaged their mortgages into derivative bundles and made billions of dollars on this huge real estate scam.  Mr. Becker follows the money and exposes the greed of the government supported capitalist system wreaking havoc on the people.

In the aftermath of one of the worst recessions in history, more Americans have limited or no interaction with banks, instead relying on check cashers and payday lenders to manage their finances, according to a new federal report.
Not only are these Americans more vulnerable to high fees and interest rates, but they are also cut off from credit to buy a car or a home or pay for college, the report from the Federal Deposit Insurance Corp. said.

Just when you think the reputation of banks couldn’t get any worse, comes word that we’ve seen nothing yet. As many as 20 banking institutions, including Barclays Bank, Deutsche Bank, Citigroup, JPMorgan Chase, UBS and HSBC, are reportedly under investigation for illegal and unethical practices toward protecting their profits at all costs and letting others pay for their mistakes. In this episode, financial expert Sheila Bair talks with Bill about the lawlessness of our banking system and the prognosis for meaningful reform. Bair was appointed in 2006 by President George W. Bush to chair the FDIC. During the 2008 meltdown, she argued that in some cases banks were NOT too big to fail — that instead of bailouts, they should be sold off to healthier competitors. Now a senior adviser to the Pew Charitable Trusts, Bair has organized a private group of financial experts including former Fed chairman Paul Volcker, former Senators Bill Bradley and Alan Simpson, and John Reed, once the chairman of Citicorp, to explore ways to prevent the banking industry from scuttling reforms created by the Dodd-Frank Act.

June 22, 2012
Matt Taibbi and Yves Smith discuss the folly and corruption of both banks and government. Also, Peter Edelman on fighting U.S. poverty.

JPMorgan Chase CEO Jamie Dimon’s appearances in the last two weeks before Congressional committees — many members of which received campaign contributions from the megabank — beg the question: For how long and how many ways are average Americans going to pay the price for big bank hubris, with our own government acting as accomplice?

April 27, 2012
Big money and big media have coupled to create a ‘Disney World’ of democracy in which TV shows, televised debates, even news coverage is being dumbed down, resulting in a public less informed than it should be, says Marty Kaplan, director of USC’s Norman Lear Center and an entertainment industry veteran. Bill Moyers talks with Kaplan about how taking news out of the journalism box and placing it in the entertainment box is hurting democracy and allowing special interest groups to manipulate the system.

Full Show: How Big Banks are Rewriting the Rules of our Economy
January 27, 2012
Big banks are rewriting the rules of our economy to the exclusive benefit of their own bottom line. But how did our political and financial class shift the benefits of the economy to the very top, while saddling us with greater debt and tearing new holes in the safety net? Bill Moyers talks with former Citigroup Chairman John Reed and former Senator Byron Dorgan to explore a momentous instance: how the late-90’s merger of Citicorp and Travelers Group – and a friendly Presidential pen — brought down the Glass-Steagall Act, a crucial firewall between banks and investment firms which had protected consumers from financial calamity since the aftermath of the Great Depression. In effect, says Moyers, they “put the watchdog to sleep.”