Lanny Breuer, the Assistant Attorney General and Head of the Criminal Division of the U.S. Department of Justice is leaving in March, 2013.  Last month we joined others calling for him to resign in disgrace. Great News for the American People Who Were Victims of the Greatest Bank Fraud in History, but unfortunately too late: 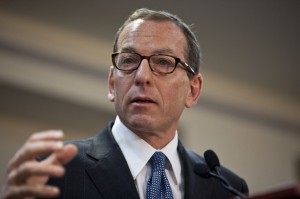 *** Not ONE big bankster prosecuted by Breuer, including the rulers of HSBC, Running the Money Laundering of Trillions of Drug Money!  Remember the Savings and Loan scandal?  Over 1,000 crooked banksters sent to jail.  Breuer’s record is zero!.

*** Stonewalled the so-called “Fast and Furious” gun mess with the ATF! Even Congress could not get to the bottom of this scandal.

***Let British Petroleum off the hook – the Corporation fined, but NO individual responsibility, NO corporate official goes to jail.   Thousands still sick and the Gulf still leaking in this massive government-corporate cover-up.  We will probably never know how many people died from the Gulf poisons.  BP continues to make billions in profits, and now with the other oil companies, are having the American Public pay their fines through higher oil prices.  Thanks a lot Lanny!  What a peach of a guy you turned out to be!  We will be watching to see which big corporation will be hiring you in the next couple of years.  We bet you get a job as lead consul to a big bank or oil company?

Suggestion:  Mr. Breuer, redeem yourself by giving away all your money and devoting yourself as an advocate for those millions of folks who suffered foreclosure by this bankster swindle.  The ones you let off the hook completely.

Now the question is:  Who is the next cover-up boy who will fill Breuer’s shoes?

Who will Obama appoint next?  The Pillsbury Dough Boy?